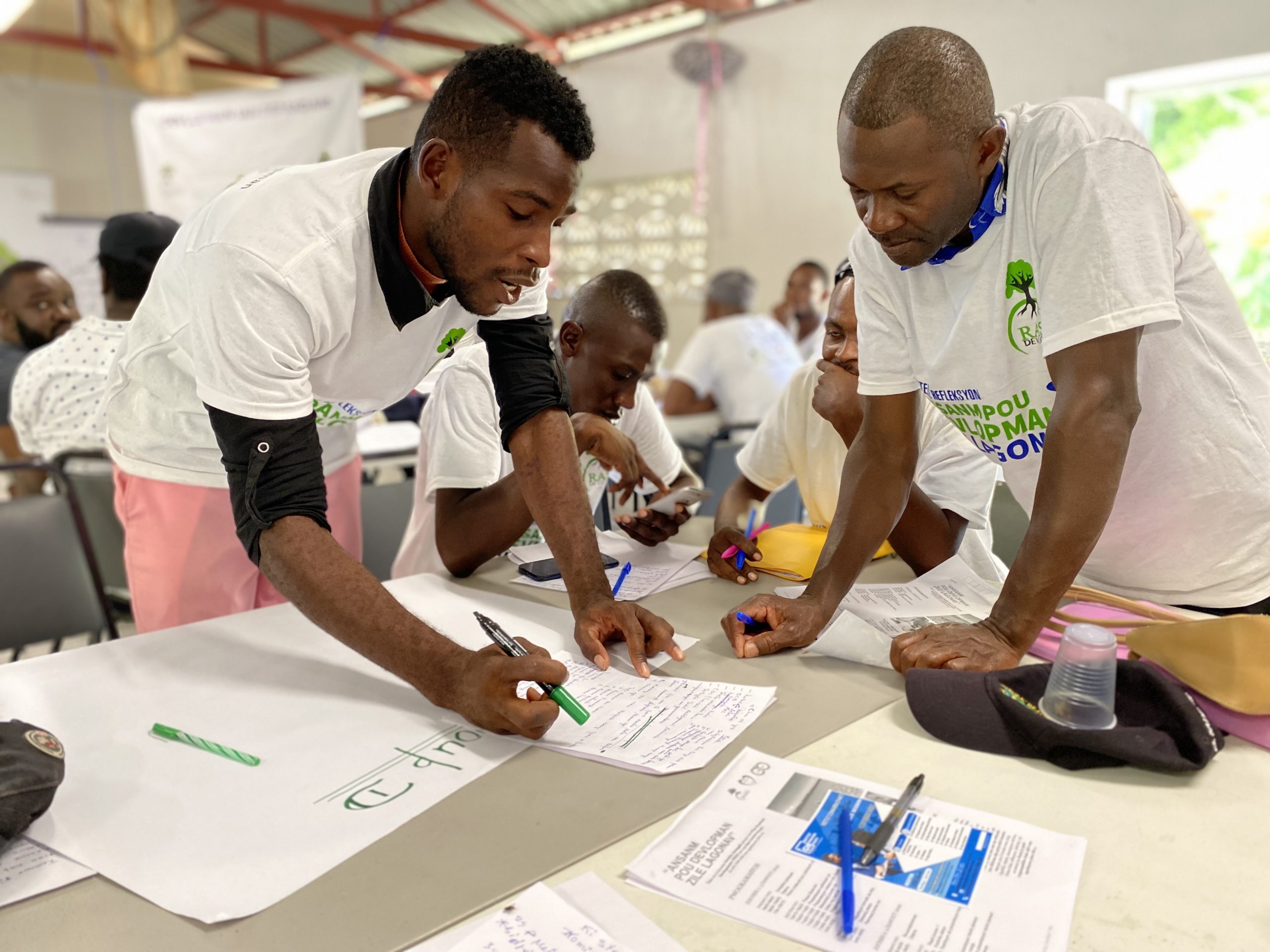 Last week, I returned from my trip to La Gonave, Haiti, where I was able to witness and participate in the work being done there by our Haitian partner organization, Rasin Devlopman. I would like to personally invite you to join me tomorrow, Thursday, August 18th, at 3pm EDT via Zoom or Facebook Live for a conversation about my trip to Haiti and Rasin’s work on La Gonave.

One of the most inspiring things I observed on my trip was the workshop Rasin held about the new Communal Development Plan, which will guide the development of La Gonave for the next 25 years. Roots and Rasin, along with local leaders and elected officials, led the charge to create the plan over the last five years, a process that mobilized actors throughout the island and the world, and now it is finally being put into action.

Since 2017, Rasin Devlopman has been working with leaders throughout Anse-a-Galets* to improve quality of life in their communities and develop the municipality. However, without an official Communal Development Plan (CDP), it was difficult to 1) attract investors and partners who could provide additional support and funding, and 2) focus and manage the activities of NGOs and other charitable organizations working in the municipality.

* Anse-a-Galets is one of two “communes” (municipalities) that make up the island of La Gonave. La Gonave is Haiti’s largest island, located to the west-northwest of Port-au-Prince, and has a population of approximately 85,000.

The island of La Gonave’s remote location makes it difficult to engage partners and/or gain the attention and support of the central government. Anse-a-Galets’ lack of a Communal Development Plan was just another obstacle standing in the way of La Gonave’s progress.

What is a Communal Development Plan?

A Communal Development Plan (CDP) is a guide that local and external actors use to ensure projects align with the needs and priorities of the local and national government and the population they serve.

More and more municipalities in Haiti are developing CDPs, which must follow an official template and be approved by the proper ministries in the Haitian government, but neither of the two municipalities on La Gonave had ever had the opportunity to create one. The mayor of Anse-a-Galets knew the importance of a CDP and made it his goal to develop one for the municipality before leaving office. In 2017, he shared this goal with Roots of Development and asked for our help.

In 2018, Roots invited the Pan-American Development Foundation (PADF), which practices community-led development in Latin America and the Caribbean, to La Gonave to get to know the island and explore ways they could get involved and support. A year later, PADF returned to help the leaders there develop a Communal Development Plan for the municipality of Anse-a-Galets, within a project funded by USAID.

In a process that took more than two years due to interruptions related to the Covid-19 pandemic, Roots of Development and the Pan-American Development Foundation brought together elected officials, members of La Gonave’s civil society, and other local leaders to research the history of development on the island, identify needs, and map resources.

This process culminated in a 339-page document that was approved locally in May of 2021 and is currently waiting for approval by the central government.

A local committee, called the Communal Development Committee, was also formed to oversee the implementation of the plan. It is made up of a collection of 81 representatives from various sectors of the population and led by the mayor of Anse-a-Galets.

Putting the Plan in Motion

It can be unfortunately common for a Communal Development Plan, once drafted, to sit in the desk drawer of a ministry official or mayor, waiting to be enacted—but not this one. On August 3-4, 2022, Rasin Devlopman, the mayor of Anse-a-Galets, and another community-based organization named CAAPELAG held a two-day workshop bringing together members of the Communal Development Committee, our Agents of Change, and other leaders on the island to discuss the contents of the plan and the role each actor can play in the CDP’s successful implementation.

Rasin will continue to support the implementation of the CDP by educating more residents on the plan, supporting the mayor and members of the Communal Development Committee, and directly implementing pieces of the plan through its own projects.

The creation of the CDP is a huge step forward for La Gonave and all its people, as well as a significant accomplishment for Roots and Rasin. Please continue to support our efforts to create community-led change in Haiti and around the world.

Please join us Thursday, Aug 18th, at 3pm EDT via Zoom or Facebook Live to hear more about the workshops and the trip.